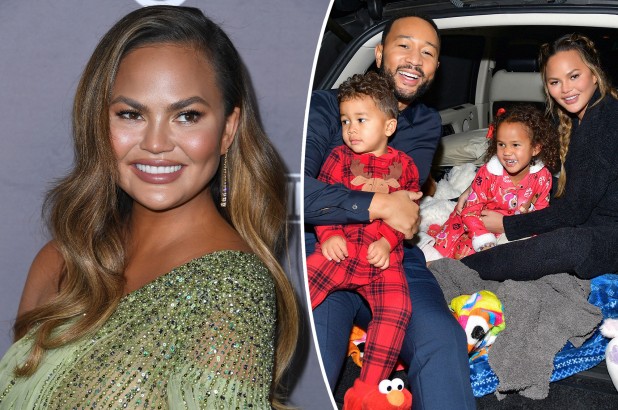 Are Chrissy Teigen and John Legend getting ready to further expand their family?
On Friday the “Cravings” cookbook author seemingly hinted that she’s going the surrogacy route, by posting on her Instagram Stories, a photo of needles and capsules that could be used for an egg retrieval procedure.
Over the image, she wrote: “Here we go again.” Teigen also added a GIF of a pink crying uterus to the photo, which included pens and a Nature Valley snack bar.
In October 2020, the model, 36, shared that she had suffered a miscarriage losing an unborn child that the couple had named Jack.
“We are shocked and in the kind of deep pain you only hear about, the kind of pain we’ve never felt before. We were never able to stop the bleeding and give our baby the fluids he needed, despite bags and bags of blood transfusions. It just wasn’t enough,” she wrote, alongside a heartbreaking black-and-white photo of herself sitting up and crying in a hospital bed.
“We never decide on our babies’ names until the last possible moment after they’re born,” she continued, “just before we leave the hospital. But we, for some reason, had started to call this little guy in my belly Jack.”
hree months later, Teigen mourned that she will never be pregnant again.
The “Sports Illustrated” alum and Legend have been married since September 2013 and share two children: 5-year-old daughter Luna and 3-year-old son Miles.
Last month Teigen revealed that she is celebrating six months of sobriety.
“6 months no alcohol!” the model, wrote on Instagram. “I have no idea what I’m doing honestly, but I do know a few things: I now have endless energy, way less anxiety (no more benzos!) … it’s pretty cool.”
Teigen’s rep did not reply for comment.
https://pagesix.com/2022/02/19/chrissy-teigen-hints-at-surrogacy-plans/