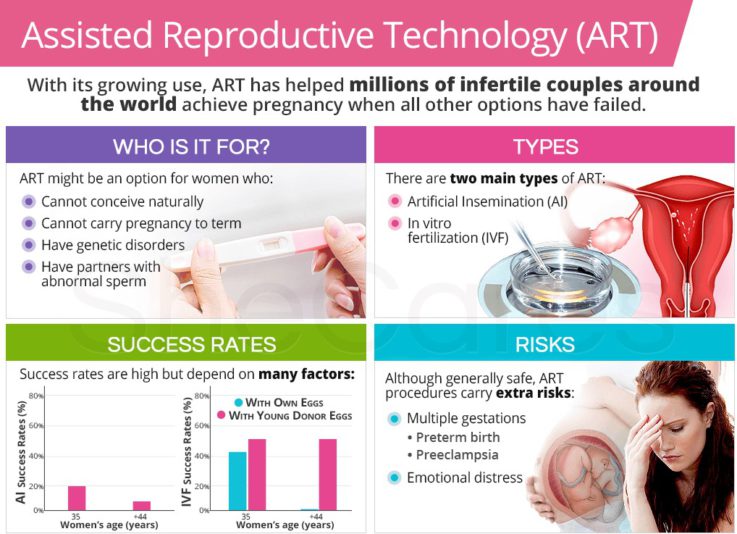 In the recent years, the use of assisted reproductive technology has been on the rise as there are now more than 7 million children conceived with ARTs.
Because for many couples, the use of assisted reproduction is the only way to achieve pregnancy and realize their dreams of parenthood, gaining a good understanding of what pregnancy after ART entails is important to making the best decisions about one’s reproductive future.
Continue reading about assisted reproductive technology, including what it is, its common types, success rates, and involved risks so that you can decide whether conceiving through ARTs is the right option for you.
What are Assisted Reproductive Technologies?
ARTs, also called advanced or artificial reproductive technologies, refer to medical techniques and procedures to help people achieve pregnancy when natural conception is not feasible. As such, ARTs are a part of treatments for infertility.
Who Can Benefit from ART?
Women with the following reproductive difficulties might benefit from achieving pregnancy via ARTs:
• Those who cannot conceive naturally
• Those who can conceive but have difficulty carrying pregnancy
• Those who have or are carriers of a genetic disorder along with their partners
• Those whose partners have sperm abnormalities

Types of Assisted Reproductive Technology
There are two major types of ARTs, artificial insemination and in vitro fertilization, although some sources do not include artificial insemination in their classifications. Nevertheless, ART types include the following procedures:
• Artificial Insemination (AI). It is typically the first ART procedure recommended to women trying to conceive, especially those who despite no tubal blockage fail to get pregnant or those whose partners have sperm abnormalities that prevent conception. AI consists of placing the sperm in a woman’s reproductive tract, most commonly in the uterus (a procedure called intrauterine insemination).
• In Vitro Fertilization (IVF). Most effective of all ARTs, IVF often follows AI after six failed cycles, especially in the case of tubal blockage, advanced endometriosis, or male infertility. It consists of harvesting eggs from the ovaries and fertilizing them in a dish outside of a woman’s body before transferring them to the uterus for implantation. They can also first undergo an intracystoplasmic sperm injection (ICSI) before being transferred.
Gamete Intrafallopian Transfer (GIFT) and Zygote Intrafallopian Transfer (ZIFT) are two alternative ART versions of IVF, during which the fertilized eggs are placed in the fallopian tubes much sooner. Although successful, IVF is the preferred type of ART with GIFT and ZIFT constituting only about 2% of all cases.
Other Procedures Involved with ARTs
Assisted reproductive technologies are also an integral part of other reproductive techniques, such as:
• Egg or Embryo Donation. When a woman does not have ovarian eggs or those she has are of poor quality, she can use eggs from a younger donor to get pregnant. It is also possible to use donor embryos, which are donor eggs fertilized with donor sperm.
• Surrogates and Gestational Carriers. Having a child through a surrogate (a woman who carries a child that was conceived with the couple’s male partner’s sperm but her own eggs) or a gestational carrier (a woman carries a child conceived with the couple’s eggs and sperm) is an option for those women who cannot carry pregnancy to term.
• Pre-implantation Genetic Diagnosis (PGD). This screening is a part of IVF and allows for detection of genetic disorders in the embryos before implanting them in the uterus.

Assisted Reproductive Technology Success Rates
Although artificial reproductive technologies are considered some of the most effective ways to help women achieve pregnancy, specific ART success rates depend on numerous factors.
ART Success Rates for IVF
The success of IVF depends on a woman’s age and the state of her ovarian reserve:
• Women under 35 using their own eggs have a 41-43% rate of live births. By the time they reach the age of 44 and above, that rate decreases to 1%.
• Women using eggs from a younger donor have a steady 48-51% rate no matter their age at the time of IVF.
ART Success Rates for AI
The success rates of AI depend on multiple factors, such as maternal and paternal age, ovarian reserve, sperm quality, and the type of AI as well as whether ovarian stimulation has been performed:
• Couples undergoing IUI (or intrauterine insemination, when sperm is deposited in the uterus) have the highest chances of conception, about 15-20% per cycle. Those who undergo less popular intracervical insemination (ICI), during which sperm is placed in the cervix, have 10-15% success rates per cycle.
• Studies have shown that up to 70% of couples conceive with IUI within the first six cycles.
Because GIFT and ZIFT are not common ART procedures, accurate and up-to-date success rates are difficult to be obtained.

Assisted Reproductive Technology Risks
The various advanced reproductive technologies are generally rendered safe for both the mother and the baby; however, they do carry additional risks with the following being the most common ones:
Multiple Gestations
It is estimated that more than 40% of all ART-conceived pregnancies are twin pregnancies. Carrying multiple children comes with a significantly higher risk of pregnancy complications, including a higher likelihood of premature birth, preeclampsia, miscarriage, and gestational diabetes.
Emotional Distress
Undergoing ARTs, especially IVF, is known to be emotionally draining, particularly because most women require several cycles to achieve pregnancy. As such, prolonged stress, depression, and anxiety might be common during infertility treatments with ARTs. High financial costs are another burden often adding to emotional distress.
Key Takeaways
Highly popular and effective, ARTs come in two main types: AI and IVF. Although the specific choice of a procedure hugely depends on maternal health and infertility cause, among other factors, most couples are advised to start with the least invasive and easier approach, which is artificial insemination. About 70% do successfully get pregnant after six insemination cycles, while those who do not typically proceed to do in vitro fertilization. The rates of success with IVF using one’s own eggs drastically drops after 35; whereas, the rates when using a young donor’s eggs remain steady across all age groups. Although generally considered safe, assisted reproductive technology carries some risks, such as multiple gestations or emotional burden. Nevertheless, ARTs have enabled millions of couples around the world to become parents after all other infertility treatments have failed to bring desired results.