Our Blog Families protest over slow pace of surrogacy legislation 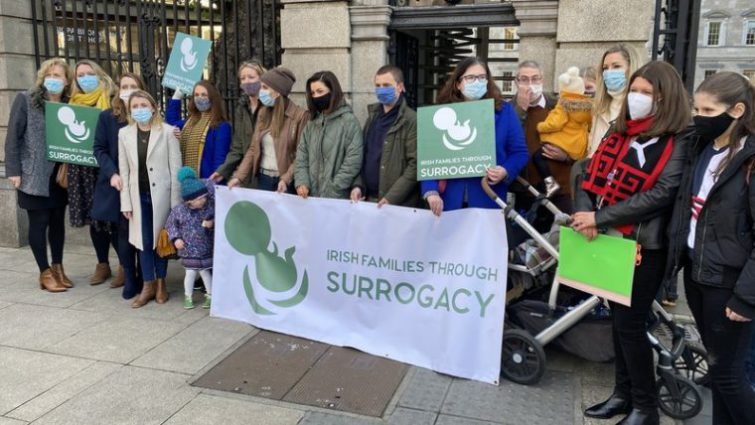 The Cabinet is to propose terms of reference for a Special Joint Oireachtas Committee to report with recommendations on international surrogacy.
It will be given four months to complete its work.
The committee will be provided with an issues paper drafted by officials in the Departments of Justice, Health and Children, in consultation with relevant ministers and their officials, to assist the committee in its deliberations.
The recommendations of the committee will then be considered by the Minister for Health as the Assisted Human Reproduction Bill progresses through the legislative process.
It is expected that any necessary legislative provisions which arise out of the committee’s examination will be inserted into the Assisted Human Reproduction Bill at committee stage.
The Department of Justice says the Government has committed to dealing with international surrogacy.
It notes that while the Department of Health has responsibility for the forthcoming Health (Assisted Human Reproduction) Bill, issues which arise from international surrogacy, including commercial surrogacy in other jurisdictions, “raise important questions in respect of rights and ethics, and concern areas of law that intersect across the remits of several government departments”.
The statement adds that there has been “substantial work and engagement on this issue” since the formation of the Government between Ministers Helen McEntee, Hildegarde Naughton, Stephen Donnelly and Roderic O’Gorman and the Attorney General and their respective officials.
The memorandum is expected to be brought to Cabinet in the coming weeks.
It will propose how to consider the issues relating to international surrogacy and how to subsequently introduce legislative change.
The joint memo will be brought to Government by the Ministers for Justice, Health and Children.
Meanwhile, surrogacy advocates have described as “bonkers” that surrogacy legislation has not been put in place in Ireland as they join families protesting at Leinster House to highlight their frustration at the slow pace of progress.
A spokesperson for Irish Families Through Surrogacy said they are concerned that a new draft bill on assisted human reproduction will exclude international surrogacy and leave families and children without any legal protection.
Speaking on RTÉ’s Today with Claire Byrne, Cathy Wheatley said: “We want our children to be afforded the same provisions as every child in Ireland and have a legal relationship with both parents.”
She added that “there are ways forward … time has moved on, England legislated in 1985 for surrogacy and it is bonkers that in 2021 we have no legislation”.
Ms Wheatley said that they want guarantees that international surrogacy will be included in the bill.
“All we are asking for is to create an ethical framework so that everyone is protected,” she said.
Ms Wheatley said the first commission on surrogacy was introduced in 2000 and the issue has been “kicked down the road” since then, with ten committees looking at the issue.
She said that the families “know the Government will do the right thing”, but that plans to set up another committee will not be enough.
https://www.rte.ie/news/ireland/2021/1102/1257352-ireland-surrogacy/