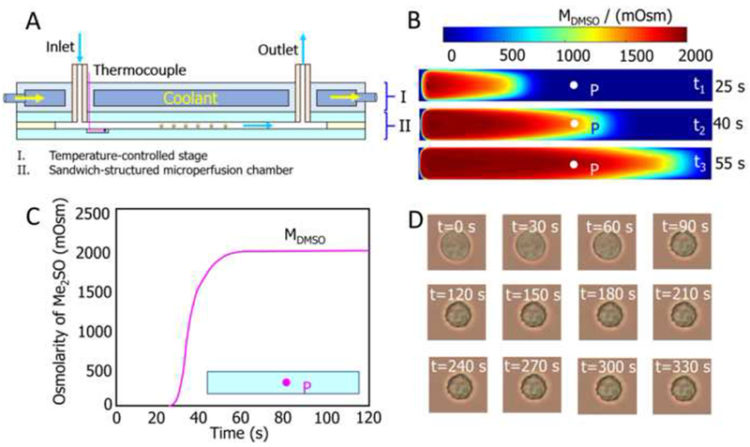 An automated embryo freezing process has been developed to reduce the likelihood of damage from freezing, or ‘cryoinjuries’, that can occur when the process is performed manually.
Normally embryos that are to be frozen need to have the water in them slowly replaced with a chemical that protects against damage from freezing, called a cryoprotectant. This happens by manually moving the embryo from one solution to other increasingly concentrated solutions of the cryoprotectant. Researchers from the National Institute of Genetic Engineering and Biotechnology (NIGEB) in Tehran, Iran, McGill University and the University of British Columbia both in Canada, have developed an automated system that gradually increases the concentration of the cryoprotectant in situ, so the embryo does not have to be moved. They were able to show that this system resulted in similar hatching and re-expansion rates to manually processed mouse embryos, while limiting molecular damage.
‘Our findings emphasise the importance of moving away from droplet-based loading of cryoprotectants to gradual concentration controls. It moves us one step closer to increasing the efficiency of assisted reproduction and the improved health of future babies,’ said Dr Mojtaba Dashtizad from NIGEB, co-lead researcher of the study published in Biomicrofluidics.
When embryo freezing is performed manually by transferring embryos from one solution to another, the sudden transferring between droplets can cause an abrupt osmotic shock, which is thought to lead to molecular damage.
To avoid this, researchers developed what they called a microfluidic chip with a chamber for the embryo and a series of tiny tubes that allowed the flow of cryoprotectants into the chamber while water could flow out. They then tested it to find the optimum time/concentration conditions in comparison to the manual method. They have now developed a ‘fully stand-alone and portable device’ that can be used for cryopreservation.
‘What if embryos simply stayed in the same place and cryoprotectants were brought to them? Microfluidics systems are really good at controlling flow and concentration,’ said Dr Dashtizad. ‘Embryos can be cryopreserved faster and with a lower concentration of cryoprotectants – a huge advantage because of the toxicity of these chemicals.’
In fact, following 12 hours post-thawing, the team observed that the platform enabled the shortening of the process by three minutes, with no negative impact on the re-expansion and hatching rates of the mouse embryos.
The authors note there was a reduction in the detrimental gene expression that causes the ‘molecular damages that have long been a source of concern’.
The microfluidic system may enable embryo freezing and cryopreservation processes as a whole to be simplified, more reproducible, and less prone to human error. In the short term, the next steps will need to replicate these findings but the intention of automating this method will be for human fertility preservation in the future.