New Dads to Celebrate Christmas with Rare Triplets via Surrogate 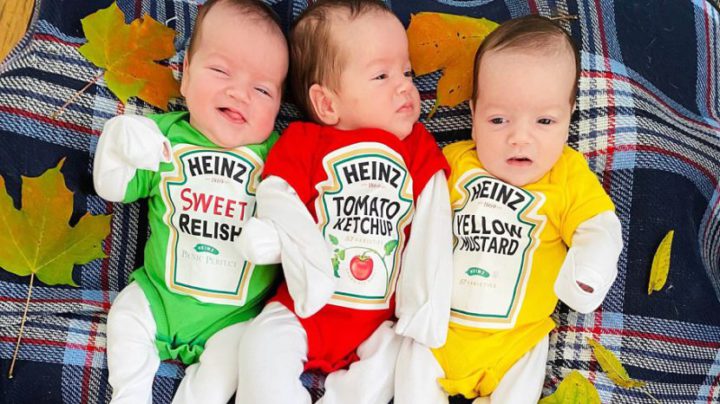 (Cleveland) — Kevin O’Neill and Eric Portenga are still adjusting to their new life after becoming parents to not one, not two, but three rare identical baby girls. The Cleveland Clinic reports Parker, Robin and Sylvie were born via surrogacy on September 9.
“Now that we’ve got our babies, I just can’t imagine not having three,” said Kevin.
“There’s no point in imagining that because that’s just a fantasy at this point,” Eric joked.
They have always wanted a family and spent a long time researching their options before deciding on surrogacy. “There’s a lot of challenges, not just financial ones as well. Then we put out into the universe that this is what we wanted, and one of our really good friends here knew Maureen, our surrogate, and she connected us,” Kevin said.
“I knew in my heart it was something that I was called to do,” said Maureen Farris, the family’s surrogate.
They agreed it would be best to use an egg donor, meaning Maureen would not be the biological mother. However, none of them could have predicted that the embryo used would eventually split into three.
“I remember just feeling really up for the adventure. It was like, well, ‘We’re here, we’re doing this.’ I felt very confident in my body’s ability to take on whatever was going to come our way,” said Maureen.
She was closely monitored throughout the pregnancy since she was considered high-risk. Fortunately, there were no major complications and her delivery at Cleveland Clinic went well.
“It was an uncomplicated cesarean birth. The little girls did well. They were managed by our NICU team. I believe all of them were born in the four-to-five pound weight range. They stayed in the NICU about two-to-three weeks,” said Stephen Bacak, MD, maternal-fetal medicine specialist for Cleveland Clinic.
The girls are now getting ready to celebrate their first Christmas, and Kevin and Eric couldn’t be more grateful.
“Santa will come, but he will most likely bring diapers,” Kevin said.
https://wkkj.iheart.com/content/2021-12-24-new-dads-to-celebrate-christmas-with-rare-triplets-via-surrogate/