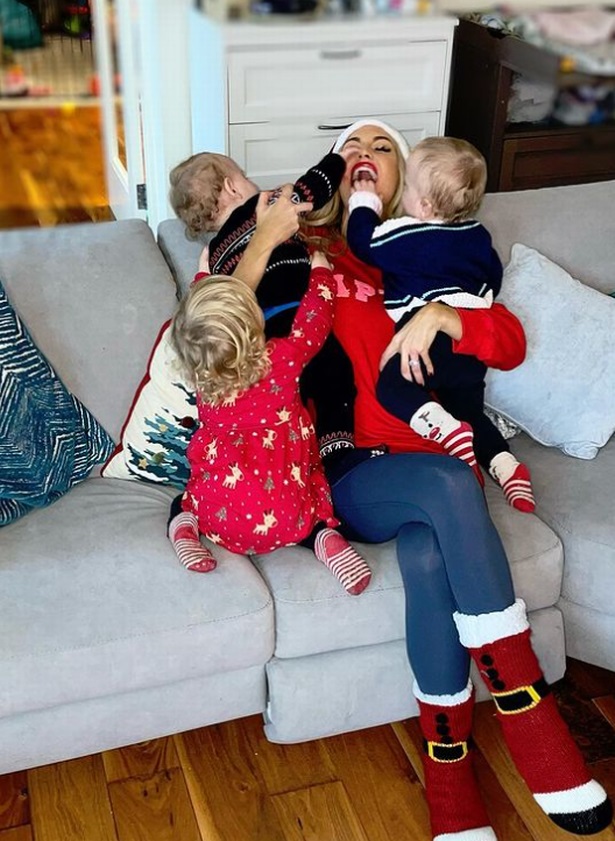 Under current legislation in Ireland Rosanna is completely and legally Hugo and Oscar’s mother, but not Sophia’s in the eyes of law as she was born via a surrogate
Rosanna Davison hopes that surrogacy laws in Ireland will be changed quickly as she doesn’t want her daughter Sophia growing up thinking she is in unequal to her brothers.
The former Miss World shares three children with husband Wes Quirke.
The couple welcomed Sophia via gestational carrier back in 2019 after suffering a heartbreaking number of miscarriages.
Rosanna then gave birth to her twin sons Hugo and Oscar naturally after becoming pregnant during the first lockdown in 2020.
The model and nutritionist is now campaigning for parents like her of children born through international surrogacy as Sophia does not have the same rights as Hugo and Oscar.
Rosanna explained to RSVP Magazine: “In general for someone who has a child through surrogacy, once they step foot in Ireland there is no legislation to cover them, they are legally vulnerable.
“The parent needs to apply to be their child’s guardian, but that is only up until the age of 18 and after that you are a legal stranger to your child.
“We are campaigning for legislation to ensure that no Irish child is left behind.”
As it stands under current law, although Rosanna is Sophia’s biological mother, she is “legally nothing” to her.
This situation affects issues like medical consent, inheritance and the child’s welfare and if something were to happen to Wes, Sophia would have no legal parent.
Rosanna continued: “From a day-to-day basis it doesn’t affect things, but if anything were to happen to the father or if the relationship were to break down the father could take the baby and the mother would have no say over it.
“There is a committee in place now to look at the situation and make a decision but something needs to be done urgently.”
Rosanna is calling for swift action because she doesn’t want Sophia to grow up thinking that she is different to her brothers.
“I am completely and legally Hugo and Oscar’s mother but not Sophia’s in law. I don’t want her to grow up thinking she is in any way unequal to her brothers,” she explained.
“The sooner it is dealt with the better for us and many families like us.
“I would like the legislation changed before Sophia grows up and understands what is going on.”
Following years of heartbreak due to suffering 15 miscarriages, Rosanna and Wes are fully focused on raising their three children.
The proud mum’s wish for her daughter and sons is simply to have happy, healthy and magical childhoods.
Rosanna recently detailed the heartbreak and hope of her journey to motherhood in her book When Dreams Come True and would like Sophia, Hugo and Oscar to read it one day.
She said: “It’s basic enough, really. I just want us to be there to support them and to make sure they are enjoying life without any pressures.
“I want our children to read our story in the future as well. It was tough to write last year, but I felt it needed to be written soon after they were born and when it was all fresh in my mind, because details fade over time.”
Rosanna and Wes would have loved a story like theirs as it would have kept them going during their most difficult days.
She added: “I used to read online forums looking for success stories that gave me hope.
“One story that did keep me going was a couple we met on holiday who had been trying for a baby for 15 years and suddenly out of the blue, their son was conceived.
“You think if it can happen to them, it can happen to me.
“I hope our story helps someone out there and gives them hope too.
https://www.rsvplive.ie/news/celebs/rosanna-davison-calls-change-surrogacy-25921663