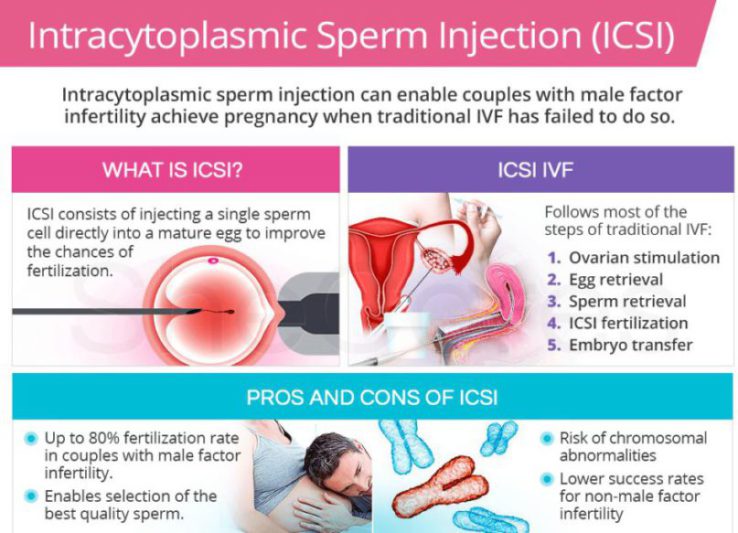 Since the first intracytoplasmic sperm injection was performed in 1992, the procedure’s popularity has grown exponentially as it gave many infertile couples hope for parenthood.
Although it has mainly been geared towards couples undergoing in vitro fertilization (IVF) due to male factor infertility, ICSI has extended to treating other causes of infertility as well. However, studies have found evidence against such widespread use, necessitating a better understanding what ICSI entails in order to choose the right infertility treatment for one’s needs.
Continue reading to learn more about intracytoplasmic sperm injection, including whom can it benefit, how is ICSI IVF performed, and pros and cons of ICSI pregnancy so that you can make educated decisions about your parenthood.

Who Can Benefit from ICSI? 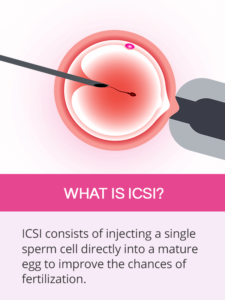 ICSI is a reproductive technique, during which a single sperm cell is injected directly into a mature egg. It differs from traditional fertilization technique used with IVF, called insemination, which consists of mixing the egg and the sperm in a dish.
ICSI is generally a suitable option for couples who struggle with male factor infertility, resulting in abnormal sperm analysis, such as the following parameters:
• Low sperm motility
• Low sperm count
• Abnormal sperm morphology
• Azoospermia, a lack of sperm in the ejaculate
• Sperm’s reduced ability to penetrate the egg
Couples who have unexplained infertility, recent vasectomy reversal, or have had several unsuccessful traditional IVF cycles might also benefit from ICSI IVF.

How is ICSI IVF Performed? ICSI IVF and traditional IVF follow the same exact steps, except for the third step, which is fertilization. It occurs in the following way:
1. Ovarian stimulation with fertility pills and injections signals the ovaries to mature multiple eggs.
2. Egg retrieval is the removal of the eggs from the ovaries, most commonly via transvaginal ultrasound aspiration.
3. Sperm retrieval is most commonly done through masturbation, after which sperm are prepared for fertilization. In case of ejaculation problems, sperm can be retrieved via surgical procedures, like needle aspiration.
4. ICSI fertilization occurs by injecting a single sperm directly into a mature egg.
5. Embryo transfer is the placement of one or more fertilized eggs into the uterus two to five days after ICSI.
After being transferred, the embryo will take three to five days to implant itself in the uterine wall, but a positive pregnancy test or early pregnancy signs and symptoms might not be obtainable for a few more days.

Pros and Cons of ICSI Although ICSI is mainly aimed at helping couples with male factor infertility, many aspiring parents undergoing IVF for other causes of infertility often consider choosing ICSI IVF in hopes to increase their chances of conceiving.
However, research is inconclusive about whether the costs outweigh the benefits and whether ICSI IVF should indeed become the method of choice for treating all infertility cases. As such, a clear understanding of pros and con of ICSI is important to help couples make the best reproductive decisions.
Pros of ICSI
• ICSI fertilization is said to occur in up to 80% of all eggs used in the procedure for male factor infertility treatment, though the rates of pregnancy, miscarriage, or live birth have been shown similar to those with traditional IVF.
• ICSI fertility treatment makes it possible to select the best quality sperm to be injected into the egg, thus increasing the chance of fertilization and a healthy progression of pregnancy.
Cons of ICSI
• Some of the eggs might be potentially damaged during needle insertion, which might be an issue for women with limited ovarian reserve or at an advanced age.
• In comparison to traditional IVF, ICSI IVF performed by couples with non-male factor infertility has lower rates of implantation and live birth.
• Some studies have found a higher risk of chromosomal abnormalities with ICSI pregnancies than in naturally conceived pregnancies, resulting in a higher risk of miscarriage, learning disabilities, or fetal cardiac problems. However, more research is needed to better understand this occurrence.
Key Takeaways
Intracytoplasmic sperm injection is an advanced reproductive technique used during in vitro fertilization that has made pregnancy possible for couples who otherwise had slim chances of getting pregnant. It consists of a single sperm cell being injected directly into a mature egg, instead of them being mixed in a dish as it happens with traditional IVF. By that, a number of obstacles that could potentially prevent fertilization, such as the process of penetration of the egg shell by the sperm, is eliminated, thus greatly increasing the chances of conception. However, despite the effectiveness of ICSI IVF in helping couples with male factor infertility achieve pregnancy, several studies have questioned its use for other infertility causes as evidence has shown lowered rates of implantation and live births as well as higher rates of chromosomal abnormalities. Consequently, a thorough analysis of the pros and cons of ICSI is highly recommended for all aspiring parents.