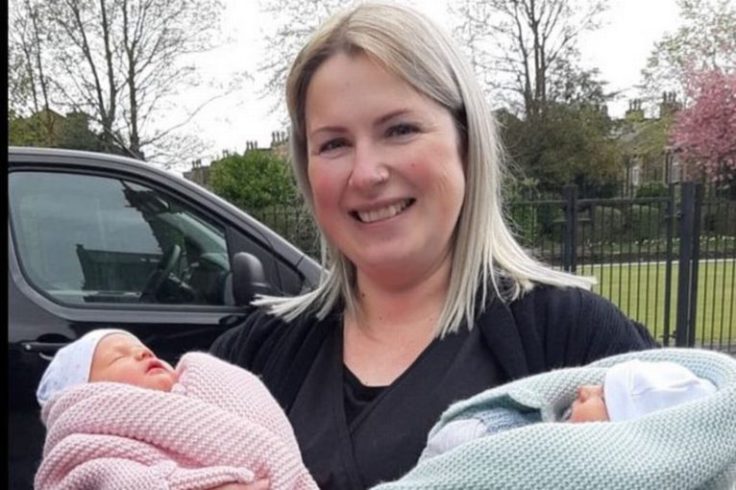 Laura McCarthy has carried five babies – including a set of twins last year – for parents unable to have their own children.
A mum who says she is addicted to being a surrogate is expecting her 10th baby.
Laura McCarthy has carried five babies – including a set of twins last year – for parents unable to have their own children – as well as having four kids of her own.
The 33-year-old became a surrogate for the first time 11 years ago, and has been ‘addicted’ ever since.
Laura says she loves the feeling she gets when she hands over the baby to the couple who have longed for a child for so long. It is what makes her keep on wanting to be a surrogate.
None of Laura’s surrogate babies have been genetically hers as the pregnancies have been successful through in vitro fertilisation (IVF) – meaning the couple’s fertilised egg is implanted in Laura’s womb.
The single mum from Bradley, Huddersfield, told: “I love being a mum, it’s the best job in the world, and I love that I can help someone fulfil their dream to become a parent.”
Speaking of the moment she gets to pass the newborn over to the intended parents, she said: “Once you see the baby in their arms you can see that unconditional love immediately. It is just so worth it. That feeling can be slightly addictive.”
Laura, who is mum to April, 13, Rowan, 11, Ada, six, and Eira, two, decided to become a surrogate for the first time after the births of her first two children.
She said: “That unconditional love that I felt, I thought how lucky I was to have that and so thought if I could help others, then why not?
“Once they are old enough they will know who I am and that they grew in my tummy.”
Now, 10 years later, she recently lost over 5st so that she could again carry a baby from someone else – this time a single man with a donated egg. However she has yet to become pregnant
Laura said: “Having had nine babies, and definitely wanting more, I couldn’t risk a tenth baby whilst being so overweight because of the associated risk factors.”
Laura says after the baby is born she keeps in touch with the parents and the children she gave birth to are told where they came from.
She added: “Once they are old enough they will know who I am and that they grew in my tummy.”
But the mum-of-four says the perception that surrogates make lots of money is wrong as it the assumption that the surrogate becomes maternally attached to the child.
She said: “People think I would be attached to the baby. Of course, I want to keep that baby safe, but you don’t have the same feelings (you have) towards your own child when you are pregnant with someone else’s,” she says.
Under UK law, surrogates cannot be paid except for reasonable expenses such as clothes and medication.
“In the UK, surrogacy is altruistic. Expenses are covered, such as travel and maternity clothes.” Laura says, adding that some people ask funny questions like ‘do you know who you are doing it for?’.
“Yes, I would not have a baby for a stranger.” she answers.
But there are some concerns more personal to Laura as the number of children she has given birth to approaches “double figures”.
Laura said: “I do get asked that. It is a sensible question.”
“I would like to carry on helping people to have their family. If my body gets to the stage where it is struggling with pregnancy, or if I get health problems or the birth is not going well, that is where a line will need to be drawn because my children need a mum.
“I never rule anything out, I play everything by ear. I have always coped well with pregnancy and have had straightforward births.”
Despite some initial shock and concern from her grandparents over her first surrogate baby, Laura says she has the full backing of her family, who would be surprised if she stopped.
“It’s so normal to my family they would be shocked if I wasn’t having more…my mum is my biggest support regarding surrogacy. She supports me in doing what I do.”
She added: “Twelve years ago, when I first started to do it, they had a lot of misconceptions. They were a little bit shocked and thought I shouldn’t do it. They saw an amazing journey with the parents and how they were respectful of me.”
https://www.dailyrecord.co.uk/lifestyle/family-kids/mum-addicted-surrogacy-prepares-10th-25905336