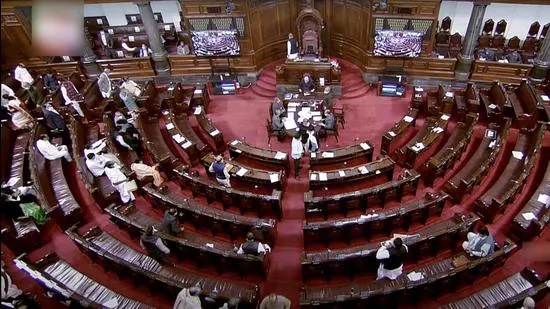 The Rajya Sabha passed the Assisted Reproductive Technology (Regulation) Bill 2021 by a voice vote, a week after the Lok Sabha cleared the draft legislation.
Parliament passed on Wednesday a bill to regulate assisted reproductive technology (ART) services such as in-vitro fertilisation (IVF) centres, sperm or egg banks and curb unethical practices related to issues such as sex selection.
The Rajya Sabha passed the Assisted Reproductive Technology (Regulation) Bill 2021 by a voice vote, a week after the Lok Sabha cleared the draft legislation. The Upper House also approved the Surrogacy (Regulation) Bill 2020, which will regulate the booming surrogacy practice in India.
Union health minister Mansukh Mandaviya introduced both bills in the Upper House on Tuesday, but discussions were disrupted by Opposition protests over the suspension of 12 lawmakers. The bills were introduced together because they were closely related.
The minister said that the ART bill was brought after due consultations and such services needed regulation to protect women and children from exploitation.
“Many such ART clinics have been running in the country without regulation. A need was felt for regulation of such clinics as there are implications on the health of those who undertake the procedure,” the minister told the Lower House on December 2. “If there is no regulation, the unethical practices will increase,” he added.
The bill was passed by the Lok Sabha on December 1 despite some Opposition members criticising provisions that kept single men and members of the Lesbian, Gay, Bisexual, Transgender (LGBT) communities from accessing these services.
The ART Bill proposes the constitution of a national board to set minimum standards of physical infrastructure, laboratory and diagnostic equipment and expert manpower to be employed by clinics and banks.
Authorities will set up a national registry and registration authority to maintain a central database and assist the national board. The bill also proposes stringent punishment for those practising sex selection, sale of human embryos or gametes, running agencies, rackets, and organisations violating the law.
The surrogacy bill aims to ensure effective regulation of the practice, asking states to form a state surrogacy board for regulatory purposes, within three months after the Centre notifies the law .
The bill allows any willing woman to act as a surrogate, and also lets widows and divorcees to opt for surrogacy to have children. To safeguard the rights of a surrogate, the bill proposes an increase in the insurance cover timeline for surrogate mothers to 36 months from 16 months provided in the earlier version.
Once the act comes into effect, commercial surrogacy will be banned and illegal in India, including sale and purchase of human embryo and gametes. The bill was controversial and underwent several improvisations because in the first draft, tabled in 2019, the government intended to allow only altruistic surrogacy with the surrogate being a near relative.
The bill was earlier passed by the Lok Sabha, but the Rajya Sabha referred it to a select committee in 2019. It will now go back to the Lok Sabha for approval. Mandaviya said that most of the recommendations of the select committee were incorporated in the bill.
“We still need to see what are the amendments that have been approved in both the Bills or whether it is the original version that has been passed. There isn’t enough clarity at the moment. But the issue of excessive paperwork remains the same, for which they’ve proposed severe punishment. We don’t know how the clinics will run in the future,” Dr Shivani Sachdev Gour, senior gynaecologist and obstetrician, and IVF expert, said.
https://www.hindustantimes.com/india-news/parliament-approves-bills-on-art-surrogacy-101638989784437.html