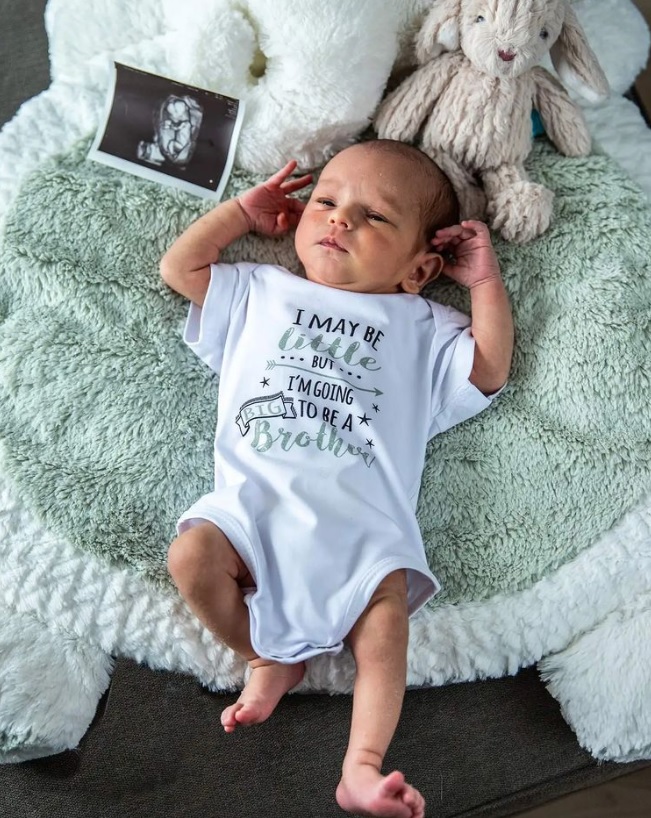 ‘Being able to give them this gift has meant so much to me,’ says surrogate.
The quiet one-on-one time with her little son will soon be over for a Regina mother.
Courtney Sastaunik and her husband Chris are expecting another addition to their family in May, just six and a half months after baby John came into the world.
On Oct. 29, Sastaunik’s best friend and surrogate Charissa Jaarsma was front and centre when she delivered John and helped Sastaunik become the mother of a little boy.
But the road to parenthood was a challenging one for the Regina woman.
Sastaunik was born with Müllerian Agenesis — a rare syndrome in which the müllerian duct doesn’t develop, resulting in a missing uterus.
“I was told that, ‘No, you won’t be able to carry your own children, but you do have the opportunity to have biological children of your own through surrogacy,'” she remembered in 2021.
Now thanks to a different surrogate, Sastaunik is expecting another child in May.
This time her sister-in-law Tara Fortier is lending a helping uterus as a surrogate for Sastaunik and her husband.
“It was just so exciting that somebody else had offered again,” she said.
“To have her offer and give us the opportunity to have another baby was just mind blowing. And then for it to work out … it’s just amazing.”
Challenging road of surrogacy for Regina couple
The embryo was transferred into Fortier’s body in late August.
It was an emotional moment for the surrogate to start carrying her future niece for her brother and sister-in-law.
“Being able to give them this gift has meant so much to me,” said Fortier.
For Sastaunik, transferring the embryo came with a lot of mixed emotions, she said.
“We were cautiously optimistic and really hopeful that this baby would stick,” said the Regina woman.
“We’re so fortunate that it did.”
Sastaunik knows first-hand that surrogacy isn’t always easy. Fortier is the third woman helping her become a mother.
Sastaunik’s first experience with a surrogate was before baby John was born.
Back then, at the 20-week ultrasound in December 2020, the couple found out that they lost their first child Josie.
“Josie Irene was born sleeping at 7:39 pm on December 29 with her daddy’s ears and dimple between her nose and upper lip and her mommy’s lips and toes,” Sastaunik wrote on Instagram.
While spending their first Christmas with baby John in 2021, the couple also remembered and honoured their daughter Josie who was born and passed away a year earlier.
“My heart was really heavy and you didn’t really know how you would feel on the day,” said Sastaunik about the days leading up to the anniversary.
“You were kind of preparing for the worst, hoping for the best.”
Becoming a surrogate for her brother and sister-in-law was always on Fortier’s mind, she said.
However, after Sastaunik and her husband lost Josie, Fortier and her family decided to step forward and help the couple.
“We decided we were game, we were in, we were in a good place in our family,” said Fortier.
“Chris and Courtney having to jump through so many hoops emotionally, physically, financially just to end up with baby Josie, who didn’t make it earth-side was very hard on them.”
While Sastaunik is excited to become a mother again, she always feels responsible for the challenges the surrogates and their families face.
“I want them to be happy,” she said.
“When there is struggle it does weigh on me quite a bit.”
When the embryo was transferred into Fortier’s body back in August, Sastaunik and her husband knew this would be their last chance to have a child, she said.
“We just didn’t think that we could handle going through another journey,” she said.
“At the time, I suppose John wasn’t even born yet either, and we were hopeful that this baby would take. But I had said to my husband we either will end up with two healthy babies that come home with us, or we could end up with one or none. And I think we just need to be happy with this because emotionally, how do you go through it over and over and over?”
Whole family excited to welcome new baby
Besides being a surrogate, Fortier is also busy taking care of her own children. The two boys are very excited that mommy is caring their future cousin, she said.
“They see my belly getting bigger every day, and the belly gets lots of snuggles and kisses,” said Fortier.
“I wonder if that’s just the beauty of being a child. You don’t have these outside perceptions of what a family should be or is or how a family unit comes together.”
While her own children look forward to welcoming their little cousin into the world, Fortier said the relationship with her brother and sister-in-law has grown closer throughout the surrogacy journey.
“We’ve always had a really good relationship,” she said.
“I think that was a good foundation for this huge moment and transformation that we’re all going through together.”
https://www.cbc.ca/news/canada/saskatchewan/surrogate-saskatchewan-sister-in-law-baby-girl-1.6308966